Things remain pretty much dead on the bird front here in Galway. A few waders are starting to tickle through mainly at Omey Strand including a new colour ringed Sanderling. I had around 60 Sooty Shearwaters passing by Leaghcarrick Pier on Slyne Head yesterday. Very few Manxies going through. Unfortunately like all headlands in county Galway there's a string of small islands offshore which pushes out seabirds that bit further. In this case passing birds are pushed out at a minimum of 1.5km. Illaunamid which is the westernmost island off Slyne Head (where we theorise all the action takes place) is a further 5km from the pier itself. There are also some access problems even getting out to the pier which seems to becoming an increasing problem with other seawatching points in Ireland. Unlike the UK we seem to be going backwards in this country with regard to land access. Given how difficult and frustrating seawatching is from mainland Galway there's really only one option and that's to get out to the islands. Apart from Inishbofin all the others require overnight camping. Landing can be problematic given how seawatching and small craft conditions are generally mutually exclusive. We're of the opinion that given the right conditions it could well compete with the like of Annagh Head, Kilcuimin Head and maybe even the Bridges of Ross?
Slyne Head has given glimpses of its potential in the past. The late David Davenport recorded an incredible total of 899 Pomarine Skuas and 39 Long-tailed Skuas during the springs of 1979 to 1981. Two weeks of seawatching were also carried out here way back in the autumn of 1969. Huge numbers of shearwaters were recorded passing e.g. 10 Cory’s, 233 Greats, 1856 unidentified large shearwaters, 385 Sooty, 14523 Manx etc. With the standards of optics and identification at the time, the mind boggles at the true extent of stuff that must have passed by. Aonghus O'Donaill and myself had 8465 Sooties, 1 Great Shearwater and 2 Long-tailed Skua's here over the weekend of 26th - 28th August last and that was during a period of virtually no passage with most birds seen flying straight out the West and North-West presumably on feeding trips. Fingers crossed for better conditions in three weeks time...

Anyway to try to keep myself occupied I joined a grasshopper and cricket course in my native Offaly last week organised by Brian Nelson. We saw a few Large Marsh Grasshoppers in one nearby bog. This species is holding its own in Ireland  being restricted to wet blanket and raised bogs. It has undergone a huge decrease in the UK and I thinks it's only found at a single site now in England at least? I found plenty of them out on Roundstone Bog on Monday the one and only day so far this week with no rain. I had a total of five species on Monday - Large Marsh, Common Green, Common Field, Mottled Grasshopper and Common Groundhopper. We had a Slender Groundhopper in Offaly the last day also. There's currently an Atlas being undertaken on the group in the British Isles with 2012 being the last year of it. We're hoping to fill in some fairly big gaps in the next while, that is if this God awlful weather ever improves! 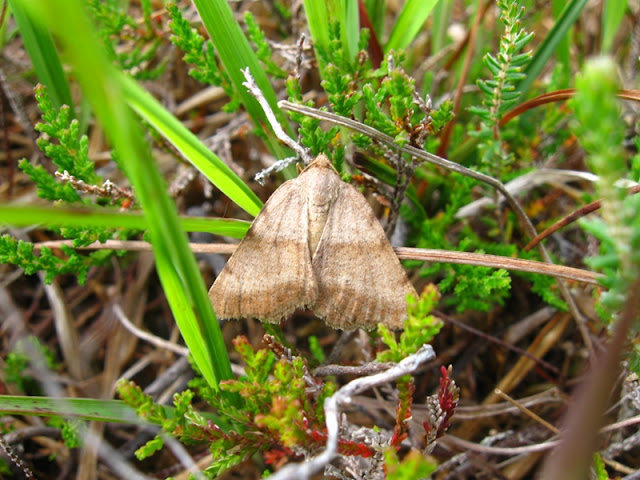