I headed up to the North-West last weekend for some wildfowl action. This Cackling Goose in the Lissadell Goose field/Ballygilgan Nature Reserve in County Sligo on Saturday morning was the first good bird of the day. This flock of Barnacle Geese has attracted numerous Cackling and a few wild Canada Geese over recent years and is probably the best spot in the country for both species.
This particular individual lacked a gular strap but had a good white patch to the front at the base of the black neck sock. These features seem to be very variable within so called races (hutchinsii in this case). Overall size, body and bill structure are probably better features to rely on rather than plumage features. The whole taxonomy of Cackling and Canada Geese has been up in the air since day one. I can see a day when all the races which are recognised by us today will be completely overhauled in time to come.
Video of the Cackling Goose here http://vimeo.com/111670583 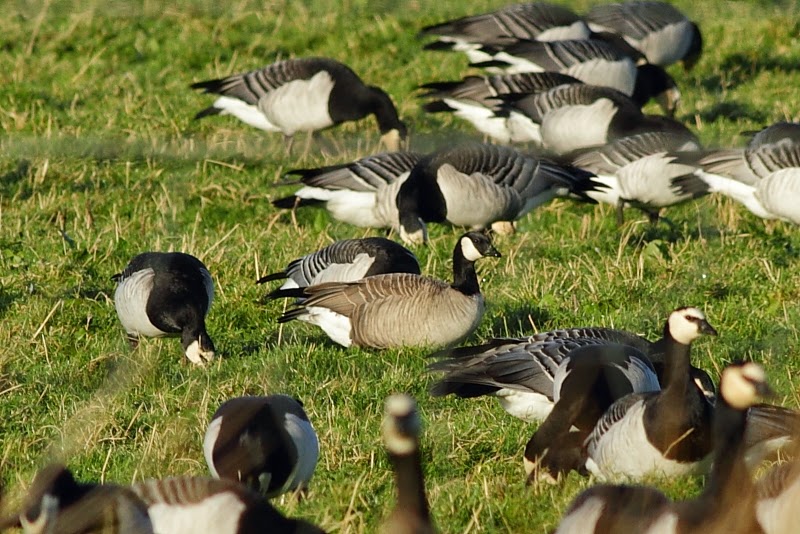 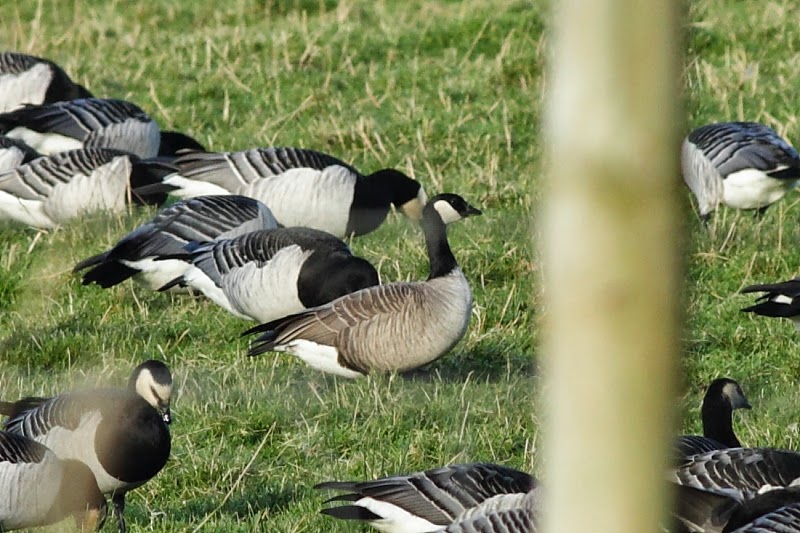 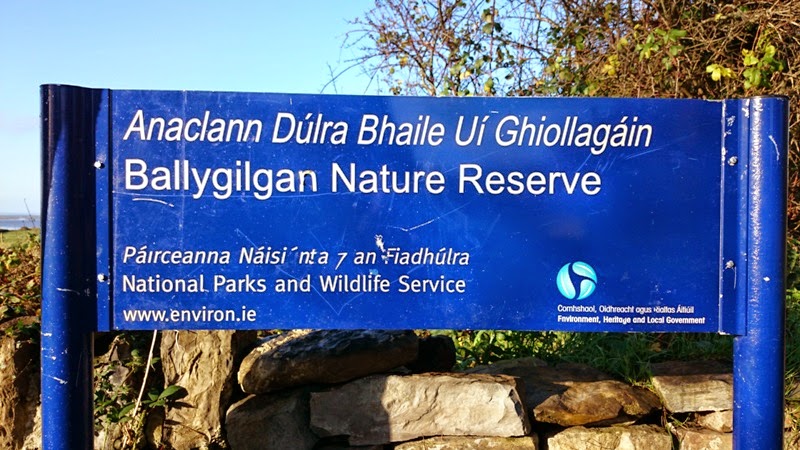 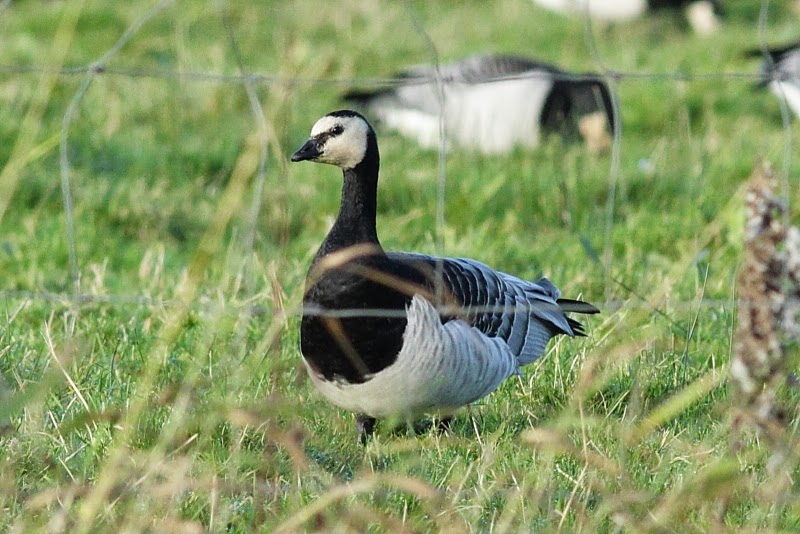 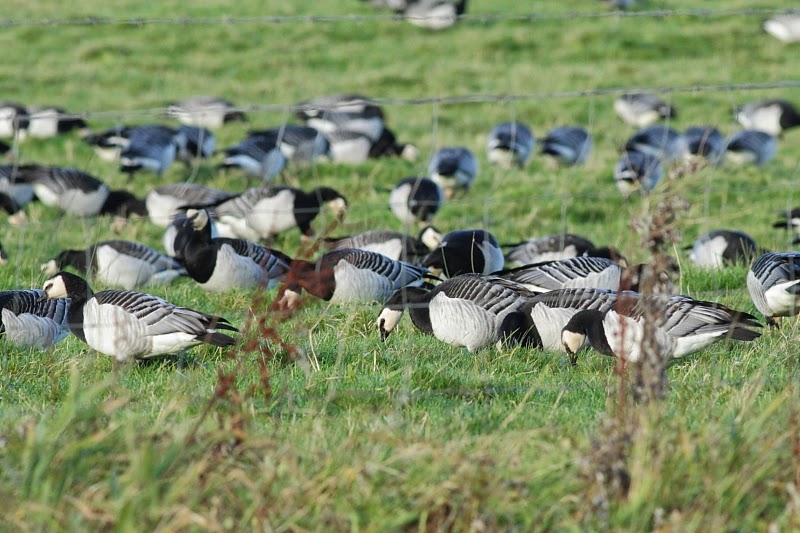 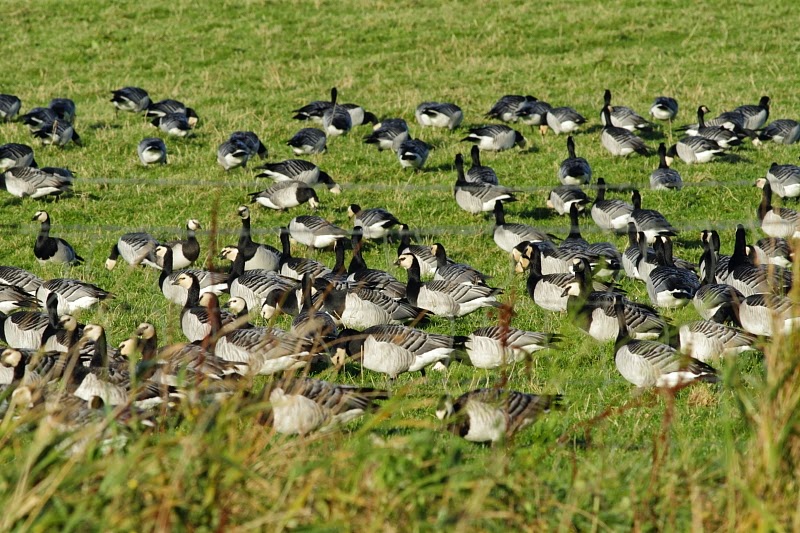 I headed up to Donegal afterwards. A quick look from the car park just off the Letterkenny - Derry road down onto Big Isle produced a few hundred Greylag and Greenland White-fronts. As usual you are at long distance from the birds from this spot.

Just up the road from here is the usual productive Blanket Nook. Best there was a male Green-winged Teal in with decent numbers of Eurasian Teal, Eurasian Wigeon and Mallard. Female Long-tailed Duck, a handful of Greater Scaup, two Kingfishers and a very confiding Otter also present. I also had an interesting adult large gull off the causeway here. It spent most of its time hawking over the water and after a while caught a starfish after diving into the water after it. With a little bit of effort it finally managed to swallow it. It had very restricted black markings on the outer primaries and closely resembled a Kumlien's/Thayer's. Such a bird has been claimed here in the last two years and is probably the same individual. I think it may actually be a Glaucous x Herring hybrid. While the upperparts were a paler grey compared to accompanying Herrings, the bill was brightly coloured, it was bigger than the Herring Gulls and the bird appeared rather pot bellied.

I spent the last few hours of the day at Inch Lough. A huge amount of work has gone into this spot mainly done by the local Conservation Ranger Andrew Speer. It's now possible to circumnavigate the entire lake on well maintained paths http://inchlevels.businesscatalyst.com/inch-levels. Three bird hides with three car parks have also been installed. I just about managed to find a space in the pump house car park. The site seems to have become very popular with locals for walks on the weekends but this doesn't seem to have affected the birds in anyway. The numbers of Whooper Swans and geese in the surrounding fields seem to have trailed off even at this early stage of the winter. One Pink-footed Goose and one Ruff were the best seen in the environs.