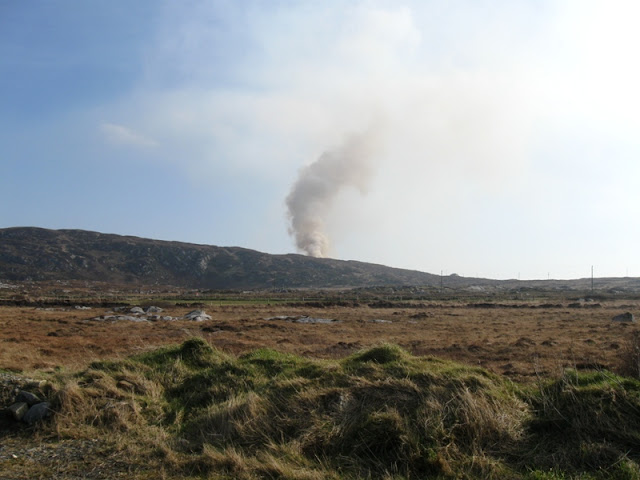 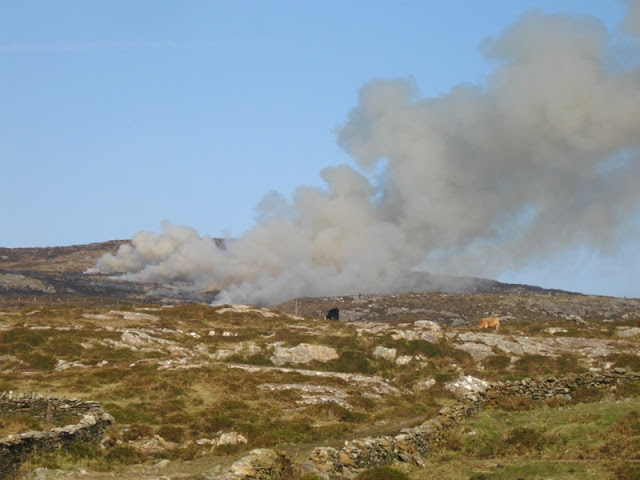 Started off the day on Saturday at Rossaveel where there were 200 - 300 large gulls around the harbour. However there wasn't a single gull of note present. 100 more large gull on the beach at Spiddal but same story.
Rusheen Bay and Nimmo's Pier also deadly quiet.
Paul Troake had the Black Brant again on Friday near Newquay, Co. Clare so I headed down that way. A quick look in the usual fields failed to produce any geese so I went out as far as Lough Muree to check if they were out there. On arrival I noticed the male scaup-type duck on the lough along with a Greater Scaup, three Pochard and a female Tufted Duck. At a distance the head shape looked spot on for a Lesser Scaup. I began to wonder if the Lough Gash bird was on the move as this was also a first-winter bird. I bumped into Jeff Copner just after this and we both tried to get closer looks at the bird. We managed good views in behind the NUIG building. It looked smaller than the male Greater Scaup, closer in size to a female Tufted Duck that was present. Again the head shape had a definite peak to the rear of the crown with a tiny spike at the very rear of the crown which alot of male Lesser Scaup can show. There was a greenish sheen to the head. The upperparts were a noticeable shade darker than the Greater and unlike most hybrids I've seen previously the upperparts weren't as solid dark grey but with what looked like proper vermiculations. Unfortunately the closer views also showed that it had way too much black on the tip of the bill closely matching Tufted Duck. It also flew at one stage which revealed that 2/3's of the primaries were clearly white. It's most likely a Pochard x Tufted Duck hybrid. A nice reminder to check the wingbar on any possible Lesser Scaups in future. Were this bird seen at a distance where it mightn't be possible to check the bill it could easily be flagged as a male Lesser Scaup.


After Lough Muree I checked a few more fields near Newquay and managed to pin down the Black Brant in amongst a flock of Pale-bellied Brent Geese. The views were distant so I couldn't get any shots on this occassion. I've attached a shot of what must be the bird that I had near Traught in Galway on 4th November.

﻿
I headed further South from here to check on the male Ring-necked Duck that has been on Lough Roo, no joy here as it was getting dark and I just didn't have the time to check the hidden corners. I did have this leucistic Curlew nearly though, shots crap as it was near dark at the time.


I headed up to Achill island on Sunday to check to see if the Black Duck was still up there and sure enough it was. I'm surprised that anyone has managed to get any decent shots of this bird as the whole duck flock are particularly flighty on this very open lake. I really had to struggle to even get these record shots. It was accompanied by three female hybrids which showed limited white borders to the speculum and pale tails.
I also had a male Ring-necked Duck on Keel Lough with a flock of Tufted Ducks with a first-winter Iceland Gull drifting over also. This was only the second Ring-necked Duck I've seen this winter. The bays and coves around Doogort, Dooagh and Keem were all extremely quiet with virtually nothing in them.

I made an eight hour round trip down to Dunmore East in Co. Waterford on Sunday with the hope of seeing the first-winter Caspian Gull found by Paul Archer there over a week ago. It hadn't been the easiest of gulls to see by most accounts as it would only drop into the harbour for short periods. John Murphy had seen it on Saturday evening so I decided to take a chance. I spent a few hours at Dunmore East first before heading over to Duncannon beach in Wexford for a short while to check the gulls there. There were a few hundred gulls present but I think there may have been far greater numbers recently present here. Most of the gulls present on the day were Black-headed and Common Gulls with hundreds more feeding offshore mostly on the Wexford side of Waterford Harbour. I headed back again to Dunmore East on the car ferry in the hope that the Caspian Gull would show up again in the evening as it had done in previous days. Unfortunately it didn't quite go to plan as there was no sign of the Caspian but I did finish up the day with two first-winter Glaucous and a second-winter and first-winter Iceland Gull. The last bird threw me for quite a while. I originally called it a Glaucous Gull on brief views. I later saw it in the company of a monster of a Glaucous Gull and noticed the very long primary protection strongly suggesting Iceland but still the entire jizz still pushed me in the Glaucous direction. After a bit of discussion with a few other larophiles here we opted for Iceland Gull .

Posted by Dermot Breen at 20:29 No comments: