A few more shots of the second-winter Kumlien's Gull that's been hanging around Omey Island now for a while. Spent most of its time sat up on a chimney of a derelict cottage.


Martin O'Malley told me that one of the Brent Geese in Kingstown Bay at the end of Sky Road was colour ringed. While I had at least 25 geese a few days later most stayed swimming around in the water which wasn't very helpful for reading rings. Martin also showed me this eggcase along with quite a large dead embryo inside. It definitely a Common Skate of some sort, the first one I've seen since taking an interest in eggcases in recent months. It was still covering in brown bark-like material which normally wears off to relieve the black leathery eggcase below which is just about visible on this one. Clew Bay in county Mayo was a renowned fishing ground for the species once apon a time. Martin also said he used to regularly come across them during his fishing years and says that they're are still a few in the area. Though they were once a common species throughout Ireland they are now listed as endangered by the ICUN due to overfishing which has decimated the population unfortunately. Commerical fishing of the species is now prohibited but are still popular amongst recreational fishermen (rod and line) but are obliged to release them once caught. They have a lifespan of 20 - 100 years. The largest can reach up to 100kg/221 lbs in weight with a 2.4 metre/8 foot "wingspan". Common Skate is now believed to relate to two different species - Flapper Skate and Blue Skate.  I'm waiting for news back from the Shark Trust to see if it can be identified down to either species.

I had this Eleven-spotted Ladybird out on Tawin Island last week when I was down there. Can't say I've seen one before. I normally only see the common Seven-spotted ones.

Posted by Dermot Breen at 17:51 No comments:

The first was initially seen on 14th January of this year while undertaking a NEWS count at Rossadillask near Cleggan. It took two further attempts to read the coded yellow ring. The bird was rather wary and usually wouldn't allow close approach. I finally managed to read the ring on 10th February. Looking through the European Colour Ring Birding site the only scheme listed as having a single coded yellow ring was a Russian project. I received no response from the organiser so I had to dig further. I just happened to see on Adam McClure's blog that he had a Oystercatcher with the same type of ring which had been ringed in Scotland.
http://bhgullsni.blogspot.ie/2015/10/oystercatcher-yellow-t64.html
This bird could have very easily have gone unreported as it does not show up in the search criteria on the ECRB website After emailing a few people I eventually got a very grateful response (below) from Harry Scott of the Grampian Ringing Group. If anyone ever comes across a similar colour ringed Oystercatcher Harry can be contacted at picades@ifb.co.uk
As it happens T90 was ringed only 17km or so away from where the colour-ringed Curlew originated from, both within the Cairngorms National Park!

"T90 (Ring No; FH57831) was initially ringed as an adult near Ballater (about 45 miles west of Aberdeen, Scotland) on 29th March 2014. Later that year it was re-sighted twice in a local glen paired up but not noted to have successfully bred. During spring 2015 it was sighted returning to our spring roost site near Ballater where it was seen on 7 occasions between 14th-31st March 2015, then it was last seen on 18th April 2015 in the same local glen as the previous summer where it was hanging around with a pre-breeding flock of 30+ Oyks.

Our efforts to ring and follow our Spring roosting Oystercatchers here in mid-Deeside have been going on for around 10yrs now and to date, after many years of metal ringing these passage Oystercatchers, all the recoveries we've received (c. 5 returns over 6yrs) had shown the birds wintering in the north-west of Wales (see map below).

However, at the March 2014 catch we applied the yellow inscribed Darvic rings for the first time on 82 birds. We also dyed several parts of them yellow in our effort to ascertain where the birds at our spring roost disperse to breed – it turns out that so far all sightings of these birds breeding are from the surrounding glens here in mid-Deeside.

Since applying darvic rings in 2014 we've been getting a lot more recoveries and they are from a wider variety of locations such as Edinburgh, Devon and I think that's now 6 birds sighted in various parts of Ireland - it will be interesting to see if any more of our yellow Darvic birds get seen in Ireland?

Anyway, many thanks once again for taking the time to report this bird, it makes all our efforts when ringing them worthwhile. If you happened to get any further sightings of this bird or other darvic'd Oystercatchers would be gratefully received too, so please spread the word amongst your birding friends as there's obviously quite a few of our birds wintering around your coastline?"

My second colour-ringed Oystercatcher was seen at the beach in front of Murlach down at Ballyconneely on 5th and 11th February. This was also a less than straightforward bird as the combination of rings yet again didn't match anything on the European Colour Ring Birding site. Paul Troake suggested that it may have been an Icelandic bird with a missing flag. Apparently several flags from this project have fallen off despite the ringers gluing and melting the ends together. It looks like it has lost a green flag on the right tibia.
It was ringed as it was incubating eggs at Ölfus, Grænhóll, Iceland (just east of Reykjavik) on 12th June 2015 by Veronica Mendez Aragonf. Thanks to Böddi Þórisson of the for the info.

Posted by Dermot Breen at 20:51 No comments:

I a colour-ringed Curlew at Rostaff Turlough near Headford yesterday just across the county border on the Mayo side. I got word very promptly back from Alan Leitch, David Douglas and Jenny Weston all of the RSPB this morning.
It was ringed as a chick near Corgarff within the Cairngorms National Park, Scotland in 2014. Amazingly it was part of a clutch of six chicks. As most of you will know, waders as a general rule nearly always lay four eggs so six is most unusual. Jenny believes the extra two chicks may actually be from another clutch entirely and were adopted as it were by another pair. You learn something new everyday! Thanks to Jenny Weston for the use of the photo.
This is the second Irish resighting from the Scottish scheme with a bird also ringed in the same area and year being seen in Dublin last March. http://grampianringing.blogspot.co.uk/2015/03/a-curlew-sighting-at-last.html 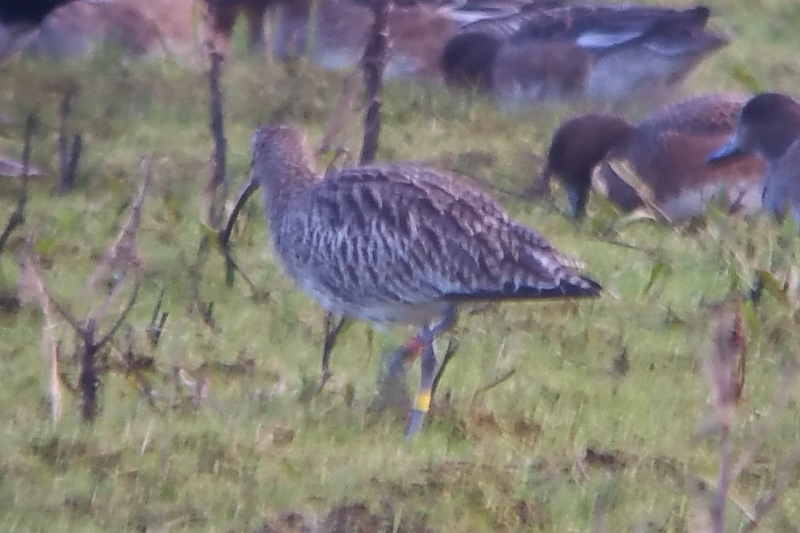 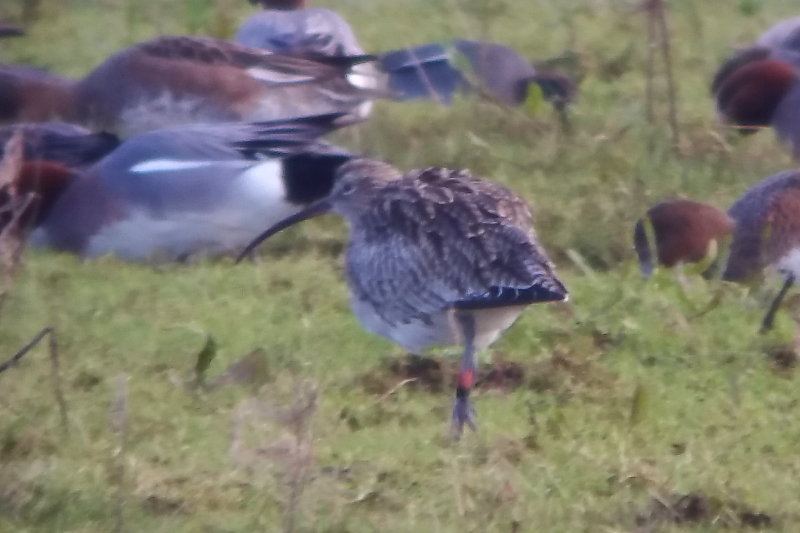 I also had a decent flock of 28 Greenland White-fronted Geese at Rostaff. A few noteworthy birds at nearby Belclare Turlough back across on the Galway side of the border as well. There was a very good sized flock of around 54 Greenland White-fronts feeding in adjacent feeds. Great to see a few family parties in amongst the flock. On the turlough itself I had a female Ring-necked Duck mostly asleep with Pochard on the Belclare village side of the lough. This is probably the first female I've seen in Galway in a few years now. In my experience female Ring-necked Ducks seem to have a greater tendency for associating with Pochard flocks over Tufted Duck. I suppose female Ring-necks do have a closer resemblance to female Pochard over female Tufted Duck. There seemed to more than the usual number of Pochard present (50 birds) so in my continuing search for a Redhead and/or Canvasback I came across a new hybrid combo for myself in the form of a male Red-crested Pochard by Common Pochard. It immediately drew attention in having much cleaner white flanks contrasting with a (darker) browner upperparts including brown primaries, a hint of the puffy head shape of RC Pochard with orange on the forehead, less black on the bill with a pink subterminal band and generally being a slightly bigger bird compared to Common Pochard. It's a very close match to the second hybrid depicted in the link below.
https://www.flickr.com/groups/444365@N25/discuss/72157604053970163/


To finish up the day I headed out to Tawin Island to look for the Pacific Diver that was discovered here nearly over month ago now. Between one thing and another, mainly extremely rough weather, I hadn't had a chance to look for this bird since being refound by Paul Troake this year. This is most likely to be the same bird initially found here in 2009. It's been seen very sporadically here and at Rinville Point and at Finvarra Point which is just across the border in county Clare. Paul almost certainly had this bird last winter but the views were just too distant to confirm it. HIgh tide may be best for bringing the bird in closer to shore. I spent a good three hours trying to see the bird yesterday. It has been seen mostly along the northern side of the headland but I saw it directly west off the headland and unfortunately was rather distant. If it was tick for me I mightn't have been able to tick due to the poor views however as I saw plenty in California this time last year I was happy enough to add it finally to my county list. There less than twenty Great northern and around five Red-throated Divers present. The sea was reasonably settled but a biting northerly wind made conditions on the side of the headland a bit nippy! Most of the divers were distant as it was at low tide at the time. It's amazing how quickly you can call Great northern Divers at huge distance. It's hard to put into words but its just down to the jizz I suppose. This bird clearly wasn't a GND nor a RTD for that matter. The only other possibility was Black-throated Diver but this bird at no time display the characteristic white thigh patch of that species. The cheek/face area seemed darker compared to BTD. One feature which I found also rather useful was the sublime and very distinctive gentle curvature of  the head and neck. The nape area seemed much fuller but I didn't get the pale grey colour that's often seen in Pacific but again may have been due to the distant and light. It was also preening at one stage and was rolling onto it's side. Had it been closer in one would imagine that the vent strap would have been seen but alas no.
Posted by Dermot Breen at 21:11 No comments:

A completely bird free post today. Just a few random shots mostly landscape shots taken over the last two months with undertaking NEWS counts. I covered a lot of coastline that I've never walked before so it was good to familiarise myself with these areas. Captions under each photo below.

A short post on a few signs of Otters that I've come across in recent weeks while walking coastline doing the Non-Estuarine Waterbird Survey. They appear to be widely distributed throughout Connemara and there probably isn't a stretch of coastline where one won't find some evidence usually in the form of spraint which they use to mark out their territory.
I also found a perfect skull of an Otter when doing counts out on Mweenish Island. The skull is very flat and wide which makes them very streamlined while diving underwater.
I've also included a shot of what I think are Mink prints from Omey Island. Doesn't seem to match anything else?

Posted by Dermot Breen at 22:36 No comments: