Aillenaveagh - Cliff of the Ravens

I took a walk into a particularly spectacular Raven nest that I've been keeping an eye on from a distance for a several years now near Cregg Hill. I wanted to get an accurate grid reference reading for the nest as it's not on the most obvious of cliffs on either OS maps or even aerial imagery. The nest is located in a townland called Aillenaveagh which is the Anglicised version of the Aill na bhFiach,. Translated from Irish to English it means Cliff of the Ravens. I've always been interested in old Irish place-names. Wildlife regular feature in these names. Lough Nahillion (Elbow (-shaped) lake) is located within the same townland and contains a few islands one of which is called Illaunanilra which means Island of the eagle. Iolar is the common Irish name for eagle, oileán/illaun being island This is surely a reference to White-tailed Eagle given the location. This would strongly suggest that this small island was a traditional eagle nest site once upon a time. Looking at the island now it would appear that trees were possibly felled or died as there doesn't seem to be any mature oak or yew present. I'm also aware of an Eagle Island on Derryclare Lough, Eagle Islands on Lough Inagh, Eagles Lough in Roundstone Bog, Eagles Nest Primary School in Renvyle, Eagle Rock off Lettermullan and Cnocán an Iorla (Hill of the eagle) near Oughterard. The old 6 inch maps are fascinating to look at as the often have each little island named going way back to 1838 when Connemara was mapped. Most of these named islands are probably long forgotten by the current local generation. Lough Nahillion was once also a roost site for Greenland White-fronted Geese but these have also disappeared as a lot of the surrounding land has now been converted to hideous Skita Spruce plantations and the areas not planted have been damaged due to overgrazing by sheep and mechanical peat extraction. Like most of rural Ireland this area is a shadow of what it once would have been formerly. In the two hours that I was on site I just saw two Great Black-backed Gulls, three Mallard and two Cormorants on the lough, the pair of Ravens and heard one Wren - grim stuff!

Getting back to the Raven nest for which the entire townland is named. I've been watching this nest now for about nine years and they have used the very same nest every year. Given that there isn't any other suitable ledges on this small cliff face it probably isn't beyond the realms to believe that Ravens have used this very nest ledge for countless generations. The nest is probably about two metres in depth and is without doubt the largest Raven nest I've ever seen. Raven nests can fall during the winter season and occasionally when in use during bad weather and/or especially if they don't have a good foundation. One can see from the photos here that the sticks at the very base of the nest are so old that they have decayed. All this reminds me of story of nesting Gyr Falcons in Greenland a few years back where the carbon testing of remains from one nest were dated back to 2,500 years ago. http://news.bbc.co.uk/earth/hi/earth_news/newsid_8103000/8103872.stm
On closer inspection of the nest it was seen that the inner cup was already lined with fresh wool, hair and moss. The two adults were present in the area and definitely took notice of my presence.

It was a little discouraging to also note the presence of a few Rhododendron ponticum bushes growing on the cliff here in what is such an isolated spot several kilometres from the nearest Rhodo hotspot which is probably Kylemore. This plant is going to be a monumental issue for everyone (farming, forestry, tourism, etc.) in the very near future but to date most parties seem to sticking their heads in the sand with regard to the whole issue. It's only going to get worse with each passing year and the price of addressing the issue jumps a few million euro with each passing year. 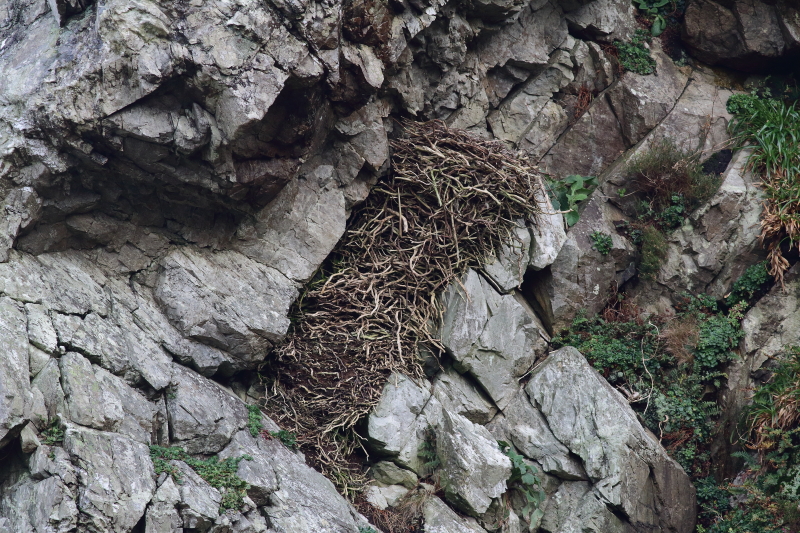 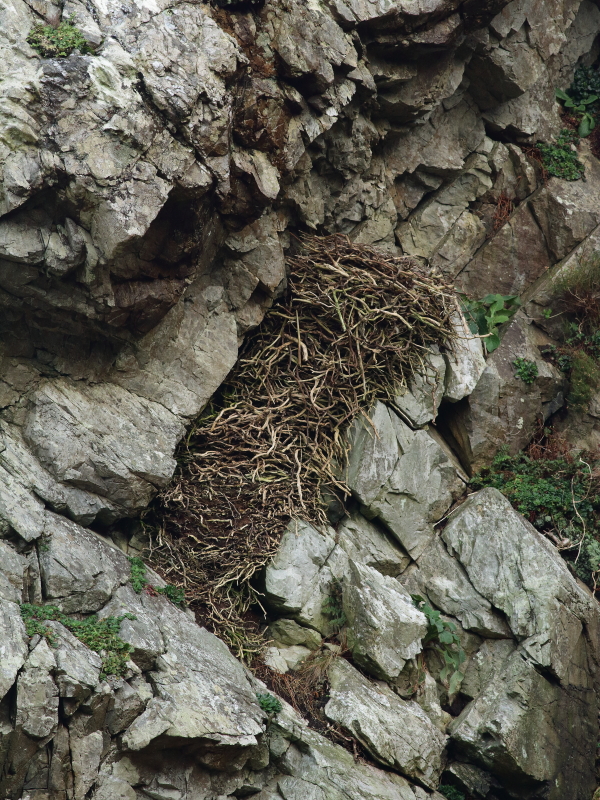