Connemara must be one of, if not the only place in Ireland where breeding Peregrines are scarcer than breeding Merlin. Of the eight Peregrine sites that I checked this year (two of which were new sites), I only confirmed breeding at only one site.
Only three of eight are found inland in the uplands while the rest are found on coastal and island cliffs.
There are references to "aierys/ayries of hawks" in two locations in Connemara from as far back as 1626 AD in O'Flaherty's hÍar Connaught. These were undoubtedly Peregrines given the locations in question. Chicks were taken from the nest "for field-sport (falconry) and were held in high-esteem".
Recent years have seen a significant increase in numbers of breeding Peregrines in stone quarries and even to a lesser effect on old castles and tower-houses in the rest of the country. The same increase hasn't been as noted in West Galway unfortunately. A few pairs try to breed in the Twelve Bens and Maumturk Mountains each Spring but it usually isn't long before they realise that there is a complete absence of any prey bigger than a Wheatear. It's impossible to raise a brood of chicks on this. This all again relates back to the denuded landscape of the uplands as a result overgrazing by sheep.

Irene O'Brien a colleague of mine has undertaken a colour ringing scheme for Peregrines for Galway, Mayo and Sligo for the last two or three years. As part of this we colour ringed the two chicks in the one successful nest here this year. I forgot how big Peregrine chicks are in the hand as I usually only see Kestrel and Merlin chicks out here. It was an nice long abseil down the chicks and my first abseil into a Peregrine nest. They are using an old Raven nest. The only successful Peregrines last year used another old Raven nest but the Ravens as they moved back into that location this year.
The colour ringing project has already provided some interesting recoveries. One Peregrine ringed by Irene only last year in the Ox Mountains up in County Sligo turned up here near Ballyconneely this winter. It unfortunately had at least one broken wing (possible car casualty) but the bird has thankfully recovered but not good enough to be released back into the wild. It now resides in the Burren Bird of Prey Centre in County Clare.
As I mentioned with the Kestrels, Peregrines had a very poor breeding season this year, most likely the worst in recent years. I think Peregrines may have been worse hit in the West as they seem to have fared reasonably well in the East where a similar ringing project is also being undertaken. 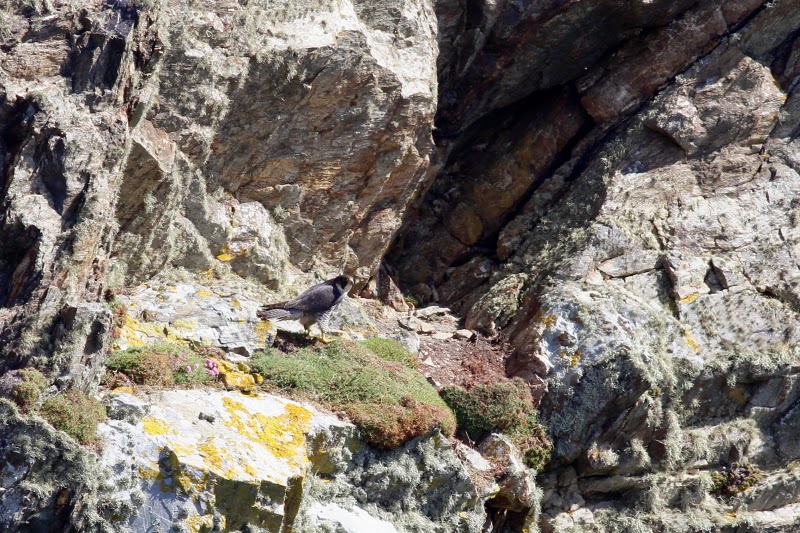 Email ThisBlogThis!Share to TwitterShare to FacebookShare to Pinterest
Labels: peregrine